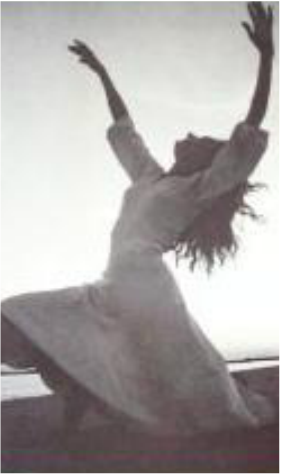 Carla De Sola. Photo by Beverly Hall.
For over four decades, Carla De Sola has been one of the foremost dancers, choreographers, teachers, and authors in the field of sacred dance in the United States. De Sola studied dance at Juilliard School of Music in New York City for four years and her primary teacher was Jose Limón, whose works are deeply spiritual. Click here for  an image of De Sola (front right) in Limón's class.

In 2008 at the Sacred Dance Guild Golden Anniversary Festival, De Sola was acclaimed as a “Living Legacy.”  When she was named an Honorary Member of the Guild in 2011, she shared this statement.

When Modern Liturgy Magazine recognized De Sola with the prestigious Bene Award in 1993, they wrote, "With an eye not only on ecumenical, but interfaith dialogue, her art embraces peace and justice. She dances on holy ground, always seeking to awaken people to the needs of planet Earth. Such a caring artistry, combined with a deep concern for liturgy, makes Carla De Sola the most influential performing artist of the last 20 years."

De Sola came from a non-religious Jewish home. As she saw Jose Limón’s Missa Brevis, she felt the sacramental nature of body joined with spirit. She earned a Diploma in Dance from Juilliard in 1960.  She danced professionally in New York City and taught dance in a number of places.

A few years after the Second Vatican Council, an exciting time in the Catholic Church, De Sola learned of the religion and became a Catholic.  Her godmother, Beatrice Bruteau, a philosopher and theologian, encouraged De Sola to attend worship with the Catholic Worker Community started by Dorothy Day.  De Sola’s contact with Dorothy Day and her significant social movement led De Sola to connect compassion for the vulnerable, justice, and faith, qualities at the heart of the gospel. De Sola’s first dance in worship was at the Catholic Worker.  The door opened to her lifetime vocation of sacred dance. As God’s love took bodily form in Jesus Christ.  De Sola’s bodily prayer has invited compassion, justice, and peace.  Through the years, De Sola’s dance has not been an elitist pursuit, but a work of service. Her dance incarnates many of the ideas of the Second Vatican Council: the universal call to holiness, reading the signs of the times which leads to connecting ancient faith with the modern world, and engaging in the pursuit of justice, peace, and the Integrity of Creation.  De Sola,  married lay woman, has been a spiritual leader and prophet. Through dance she has proclaimed the scriptures and led ritual. 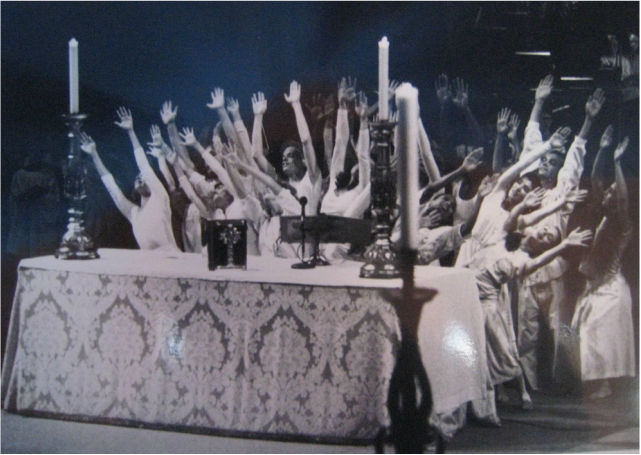 The Dean of the Episcopal Cathedral Church of St. John the Divine in New York City, James P. Morton, recognizing how arts can be windows to the Divine and he enthusiastically nurtured sacred dance. He supported De Sola in having Omega Liturgical Dance Company at the Cathedral starting in 1975. De Sola became one of the artists-in-residence at there.

The Dean affirmed the idea of Arthur Eaton, who would become her husband, to build a dance studio in the empty crypt.
Omega, functioning as a company-in-residence there, regularly brought the beauty of dance to various services and events. De Sola taught workshops and she and the company were invited all over the US to minister through dance. The company continued for over twenty-five years at St. John the Divine and is now at Middle Collegiate Church with the name Omega Dance Company. “New York's premier professional sacred dance company and one of the oldest sacred dance companies in the United States, was founded in 1974 by sacred dance pioneer Carla De Sola.” Read more of the history and of the upcoming events of the Omega Dance Company on the east coast.
From the favorable reviews in the New York Times and Dance magazine in the 1960’s of the dance of this Juilliard graduate, through choreography for gatherings of the United Nations, the National Council of Churches, the Catholic Liturgical Conference, and myriad other groups, De Sola has had a profound impact.  Her teaching and performance have enriched innumerable  events in churches, synagogues, religious conferences, Sacred Dance Guild festivals, retreat houses, and more. Over the years De Sola has not only performed and taught workshops throughout the continental U.S. but also, in Hawaii, Ireland, Israel, France, Guam, Sweden, Canada, Australia, and Belize. 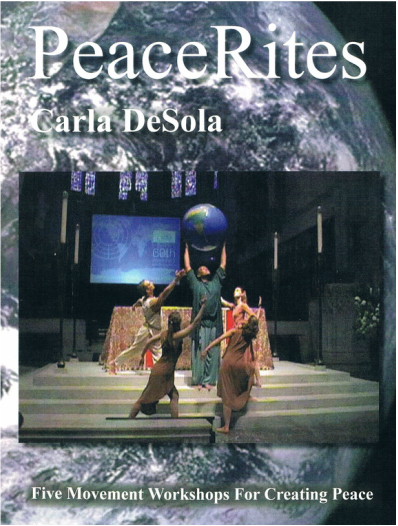 New Adventures in the West

De Sola and her husband moved to California in 1990. She earned an MA at the Pacific School of Religion, Berkeley, in 1993. She founded Omega West Dance Company in the San Francisco Bay area. They frequently dance in concerts, retreats, churches, and interfaith services.
At the Graduate Theological Union, including Pacific School of Religion and CARE, that is, the Center for Arts, Religion, and Education,  http://www.care-gtu.org/  De Sola has taught a wide variety of classes including: Dancing Passages and Seasons, Sacred Dance for Healing, Liturgical Dance, Dance as Living Scripture, Dance Meditation, Dance and the Art of Peacemaking, Creating Sacred Dances, Dance of the Woman’s Spirit, Art and Religion, Spirit in the Arts, The Great Banquet, Arts and Theology, Worship and the Arts.

De Sola’s vitality and passion are apparent as she continues creating.  She created a dance for the opening of “Birds of Longing,” an interfaith visual exhibit at the Doug Adams Gallery, Pacific School of Religions, Berkeley, September 11, 2013.  She went to New York in May, 2013, teaching a new choreography of the “Our Father” to the Omega Dance Company there. http://www.youtube.com/watch?v=t9e_CJk5jFM
De Sola for many years, has designed movement for the annual early morning Good Friday interfaith prayer and non-violent protest against Lawrence Livermore Laboratory’s role in creating weapons of mass destruction. The Ecumenical Peace Institute continues organizing these gatherings which started over 30 years ago.  Read of the 2015 event. http://globalsistersreport.org/column/justice-matters/dancing-and-praying-nuclear-age-24611  Like prophets of old, Carla De Sola condemns what brings death.  Like prophets of told, she gives hope of new life.
A main person who has collaborated with De Sola producing videos and books and sharing liturgies with dance is Father Thomas A. Kane, C.S.P., who teaches at Boston College. He is a Paulist priest, and an internationally known ritual maker and videographer. He has produced many documentaries about the church and culture in different parts of the world such as Africa, Latin America, and the South Pacific. He has produced videos including The Dancing Church of Africa, The Dancing Church of the Polynesia and Melanesia, and FIESTA! Celebrations at San Fernando Cathedral.

People are invited to explore the works of this prolific choreographer, teacher, and writer in the Carla De Sola Collection in the Graduate Theological Union Archives http://gtu.edu/library/special-collections/archives   which has over 900 programs of her dances, fliers, letters, articles about her, as well as, films of her choreographies. These are organized as Events from1964 until the present, Workshops and Choreographed Pieces, Classes, and Correspondence. 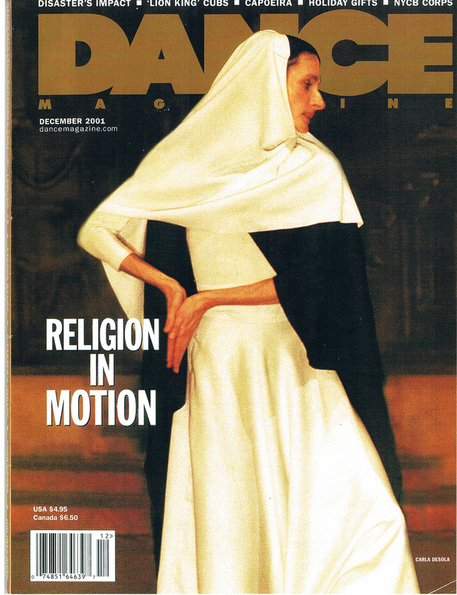 De Sola was featured on the cover of Dance Magazine, December, 2001. The article included her work and that of Omega Liturgical Dance Company.

Resources by and about Carla De Sola

De Sola has authored chapters or articles in

Performance of American composer Carson Cooman's work "I Have Seen the Lord: a Mary Magdalene Sequence" (2006) for SATB choir, alto saxophone, organ, and dancers at the Investiture and Recognition of Marc Handley Andrus as the Eighth Bishop of California in Grace Cathedral, San Francisco. The work was performed to a dance choreographed by Carla DeSola. (July 22, 2006)  http://www.youtube.com/watch?v=44AcTCgWI8M

Text by Sister Martha Ann Kirk, Th.D., Professor of Religious Studies at the University of the Incarnate Word, currently writing a biography of Carla De Sola.